The New York Lizards are a top ranking Major League Lacrosse team residing at the James M. Shuart Stadium at Hofstra University in Hempstead, but that’s not the only thing they’re good at. With 14 regular season games, camps and tournaments the team and crew stays busy. In February, the New York Lizards and Fat Guy Media got together to discuss an effective Inbound Marketing strategy and by March, the ball was rolling. Jumping on board with the Fat Guy team, the Lizards have outdone social media for sports teams with impressive content to share resulting in strong connections with social users.

Using Facebook, Instagram and Twitter, our goal was to educate existing fans of the Lizards’ social presence and direct traffic to the website. In order for this goal to be successful content would have to be created and shared to all demographics of fans; from young to old, coaches to athletes and more!

With only 270 pictures and videos posted to Instagram, the Lizards currently have 18,400 followers. Instagram attracts the younger target audience, usually too young to have a Facebook, with promo pictures, games and events, clips of insiders and game highlights. The idea of Instagram is to visually entice social users. One tactic our social team has used when posting is to feature images of the players and provide a connection between followers and athletes. Once fans become familiar with the players and grow to look up to them, we begin to promote shop items. For instance, over the course leading up to the first game day of the season, April 12, we featured posts of Paul Rabil, a newly acquired teammate of the Lizards. Once Rabil gained a fan base, we posted Rabil’s replica jersey for sale on the online store.

The Lizards’ Facebook account provides a strong face to the team being that it reaches out to audiences young and old. The objective of Facebook is to create a social connection with fans and followers, which in turn, encourages followers to share with their followers and direct traffic to the website. The Facebook content usually posted includes, pictures, promos, updates, game highlights and blogs. Recent Facebook success comes from blog postings. In the past few months we have analyzed certain Facebook posts which have included blog links. These links generated an impressive amount of traffic to the website. Our main goal was to reach a number of social users to create a higher fan base. By creating relevant and entertaining content, the Lizards’ followers responded to the posts and shared the posts with their followers. This increased the numbers in followers, contacts and visits to the website.

With 12,200 followers, Twitter connects with users using real-time interaction, including live feed and updates. A majority of the Lizards’ tweets consist of score updates during games. Twitter also works well when posting links to blogs, quotes from the coach and players, retweets of the players, connecting with companies and fans and much more. Like Facebook, links were used to generate traffic to the website. The most successful tweet was a blog link titled, “3 Lacrosse Drills That Will Make You Look Like a MLL Player” and a short link for followers to click and read the blog. 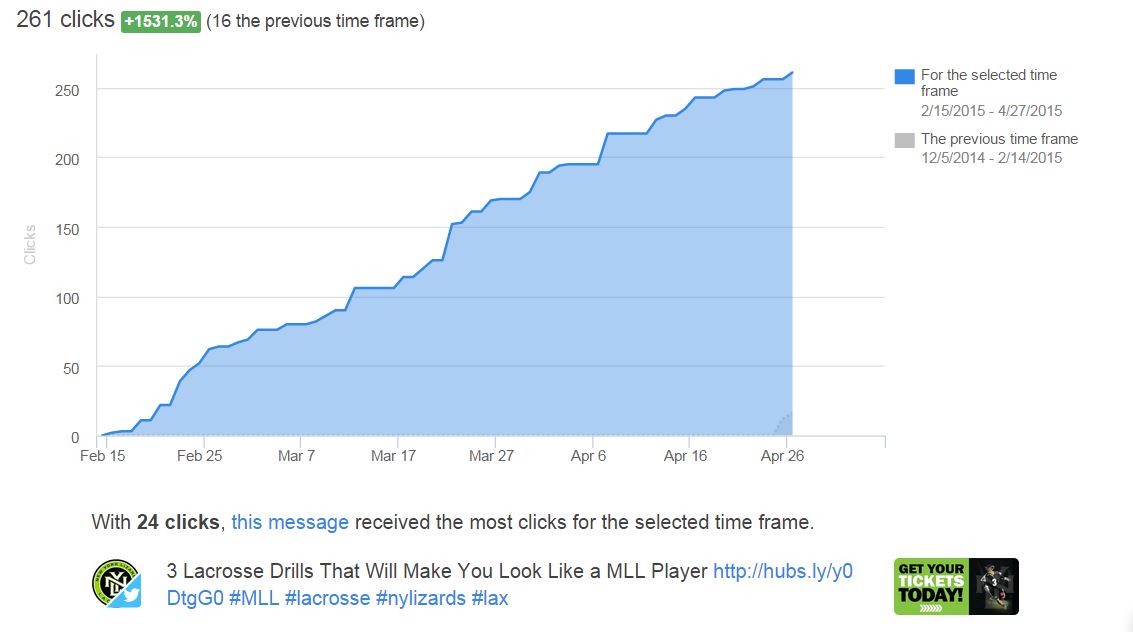 Being able to connect with those fans gave way to the Lizards’ success. Social media for sports teams can increase in the amount of followers by gaining the support of their fans. Fans are evangelists who are more than happy to promote their team. To celebrate the Lizards’ success and continue with Fat Guy Takes Long Island’s monthly giveaways, we are raffling five tickets, each for two winners to come to the June 20 game of the New York Lizards vs. Charlotte Hounds. The team at Fat Guy Media will be there to support our favorite lacrosse team and we hope to see you there! The winner will be announced June 5. Enter below for your chance to win.