Social media is a tough marketing tool to master. You can do a million things right, but one mistake can sadly tarnish the shining reputation you’ve built for your brand. Okay, maybe not every little blunder will ruin your company’s name. But still, even if you don’t do something as glaringly offensive as exploit an NFL domestic violence case to sell pizza, there are a number of social media mistakes that can be counterproductive to your marketing efforts.

Social Media Mistakes That Are All Too Common

The customers who patronize your business are likely a diverse bunch. It should go without saying that posting offensive content on your social media accounts is a no-no, but you’d be surprised at how many big companies end up doing so anyway. For example, before tweeting with a trending hashtag, do a bit of research about what the hashtag is referring to. Sometimes, hashtags do not appear on the surface to be politically charged, but in reality, they’re being used to raise awareness about a sensitive issue.

Consider the case of Entenmann’s, the maker of the delicious, pre-packaged baked goods we all love so much. In 2011, they tweeted using the hashtag #NotGuilty in an attempt to make a joke about eating tasty treats. What they didn’t know was that the hashtag was dedicated to the verdict of the Casey Anthony trial which, in the opinion of many people, was unsettling. Entenmann’s apologized soon after they realized their error. Though it was likely one of many innocent social media mistakes, it could have been avoided with a bit of care.

Madness Without a Method

Unleashing your creative side on social media is highly recommended. However, doing so in an unorganized manner is not. It’s important to develop a strategy before you begin using social media for business. You must first understand who you’re marketing to, because different audiences respond to different types of content. 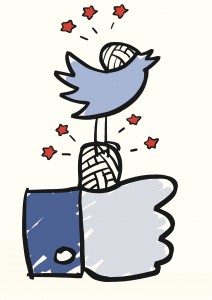 Every social network has a different system of posting etiquette. For example, LinkedIn is strictly business. You’ll want to keep the number of your posts minimal and the content of your posts informative and professional. Twitter, on the other hand, has plenty of room for entertaining, humorous tweets. Unlike LinkedIn, you should tweet often or else your voice will be silenced in the hustle and bustle. Facebook is a sort of a happy medium. You definitely shouldn’t post to Facebook as much as you tweet, but Facebook has a little bit more room for fun than LinkedIn.

One of the biggest social media mistakes you can make is forgetting about the social aspect. Social media serves as a means by which you can connect with potential customers, current customers and other businesses in seconds. Humanizing your brand on social media is an important aspect in building trust. Responding to questions and complaints from people is a great way to show that you truly care about your customers.

By avoiding these social media mistakes, your business will be well on its way to building the strength of its social media marketing campaign. If you have any questions about social media and its nuances, the Fat Guy team is sure to have answers. Give us a call at 516-535-5353 or email us at sales@fatguymedia.com.