Last weekend in Chicago, the Grateful Dead took their final bow on stage at Soldier Field as a part of their farewell tour. Twenty years since the last Grateful Dead show, the band set an all-time attendance record at Soldier Field. For the most anticipated concert of the summer so far, the Grateful Dead enhanced the event experience by executing a multi-faceted digital marketing campaign that played into Deadhead’s sense of nostalgia. The Grateful Dead, who grew to popularity through organic promotion long before the time of Snapchat, embraced social media with fervor to promote their last hurrah. Professional concert photography graced their page on Facebook; Twitter promoted guerrilla marketing-style merchandising trucks that drove through the streets of Chicago; Snapchat featured Grateful Dead geofilters; and Instagram photo frames were available for download. As a result, the Grateful Dead’s digital marketing campaign went viral in a way that fit the spirit of the band.

Throughout 2015, the Grateful Dead have been heavily promoting their final tour in which Trey Anastasio of Phish played in place of Jerry Garcia, who passed away in 1995. The three shows in Chicago sold out so quickly that two additional dates were added in California. Without a need to sell tickets, the Grateful Dead executed a digital marketing blitz that helped enhance the fan experience and create buzz across the nation. Deadheads are known for a lot things; one of them is their love for participating in the Grateful Dead show experience. For these final shows, the band hit the right digital marketing notes to fuel fan participation in a way that was impossible when the band formed in 1965. Before the tour even started, the Grateful Dead created a microsite — www.dead50.net — just for news on the 50th anniversary Grateful Dead tour. While Deadheads complained on Facebook and Twitter about a lack of tickets, the band posted continual updates about the reunion. As the shows approached, the Grateful Dead launched a social media marketing campaign that drew intense fan participation. In the days surrounding the final Grateful Dead show, the band’s social media streams featured an array of activity for both the fans at the show and those watching at home (all five shows were available to stream live on YouTube). For a limited time on Facebook, Deadheads were able to add to their status that they were “listening to the Grateful Dead.” On Twitter, hashtags, such as #FareTheeWell and #Dead50, began trending. 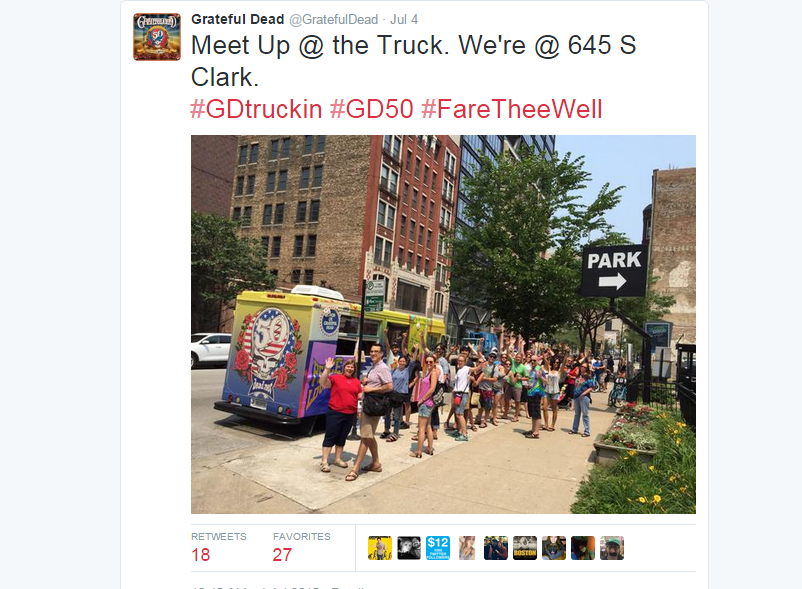 When the Grateful Dead reached Chicago on July 3, the band’s promotion mixed new and old marketing tactics. All weekend, multi-colored Grateful Dead trucks selling limited-edition merchandise drove through the streets of Chicago. The only announcement about their location came from the Grateful Dead’s official Twitter account using the hashtag #GDtruckin. In a matter of minutes, hordes of Deadheads were on the scene. Fans joined in on the game by posting pictures of the trucks on social media. For these final shows, the Grateful Dead and its fans could be seen all over Chicago. Grateful Dead logos graced the tops of pizza boxes of one establishment as part of one promotion. In other locations, the sides of a few buildings were painted with an artistic advertisement for the band’s website. In New York, the Empire State Building featured a Grateful Dead-themed light show, which went viral on social media. For the Grateful Dead, who were never shy to experiment, digital marketing proved to be the perfect avenue for their unique blend of organic promotion.