If you operate your own personal social media accounts, you know that mistakes are bound to happen here and there. When an ordinary user messes up on a post, there are hardly any major consequences. However, when a big brand or corporation makes an error (depending on how serious it is), their reputation (and sales) could take a huge hit. So, to avoid becoming another victim of internet backlash, here are some social media fails that you could definitely learn from!

One of the most essential responsibilities for all brands when using social media is to create and share original content that sets them apart from competitors. That’s why it was a little puzzling when British Airways published this Virgin Atlantic sales promotion on their Facebook page back in 2016. 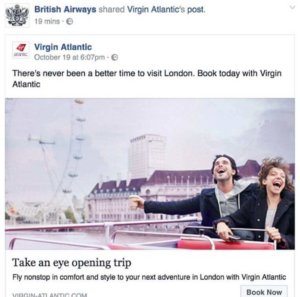 So, here’s a simple word to the wise for all brands on social media to abide by: it’s never ever a good idea to give your competitors free publicity under any circumstances.

When it comes to Christmas, Thanksgiving and the Fourth of July (just to name a few), it’s highly common for brands to post unique graphics and messages that relate to each particular holiday.

However, there are certain holidays that are best left alone due to their sensitivity. For instance, on Martin Luther King Jr. (MLK) Day, the Seattle Seahawks football team tweeted out this teary-eyed photo of quarterback Russell Wilson along with an MLK quote. 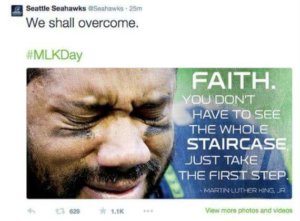 Since this tweet was around the time where the Seahawks were making a Super Bowl run, many people took it as a comparison to the decades long struggle for Civil Rights in America.

While the Seahawks probably meant well, it’s best to leave sensitive topics alone since its likely to come across as oblivious or offensive.

As a way to honor the 2014 World Cup match between the United States and the African country of Ghana, Delta Air Lines posted a photo of each nation. The first image, meant to portray the United States, featured the Statue of Liberty. 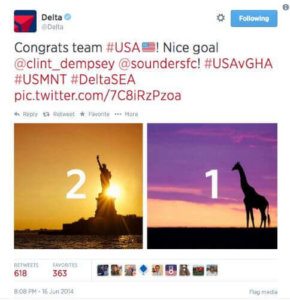 Conversely, the other image that was supposed to represent Ghana showed a giraffe. However, Ghana does not have any giraffes. Followers immediately jumped on Delta for their ignorance.

The lesson here is to always fact-check your posts before publishing!

What happened next were thousands of inquiries grilling them about their supposedly shady business practices. The hashtag started trending, but for all of the wrong reasons.

This social media fail signified a complete lack of awareness from the company. Hashtags are a great way to engage with followers and build awareness, but there’s a time and place for everything.

As a brand, you have to always be mindful of potential blowback when you’re facing even the slightest bit of controversy.

If you’re looking to elevate your brand to the next level, make sure that you stay as far away from these social media fails as possible! 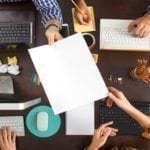 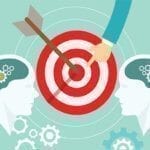