When it comes to advertising, controversial publicity stunts are a dime a dozen. Most of the time, they either fall flat and generate zero buzz, or create an adverse, negative reaction from followers. In any case, the newest Burger King ad depicting a rotting, moldy Whopper can certainly be classified as controversial. So, we decided to get to the bottom of the ad, as well as what it accomplishes and its effect on audiences.

The Moldy Truth Behind the New Burger King Ad

The ad promotes the brand’s pledge to drop artificial additives by the end of 2020 in all U.S. locations. In fact, they have already fulfilled their end of the pledge across much of Europe and in over 400 U.S. restaurants.

Although these kinds of campaigns mean well, they generally come and go without generating as much as a passing acknowledgment.

However, this Burger King ad is invariably different. If you’ve seen it, you know why. Firstly, it evokes an almost visceral reaction. The ad features high-resolution photography and video of a Whopper untouched throughout the course of 34 days.

Each new shot captures a still image of the moldy Whopper, alongside a time stamp showing exactly how long the sandwich has been left to the elements. The tagline for the ad reads: “the beauty of no artificial preservatives.”

A Shot at McDonald’s?

However, unlike Burger King, McDonald’s loads their food with artificial preservatives, which have helped the meal keep its shape and form over 10 years. You cannot say the same for the Whopper in the ad. In just over a month, mold completely overtakes the sandwich. 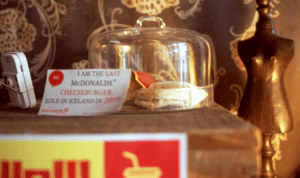 Although the Burger King ad doesn’t mention McDonald’s, it’s not a stretch to make a connection between the two.

This new Burger King ad certainly has people talking. But time will tell if it really hits home for audiences and accomplishes its goal.

How Hallmark Holidays Can Lead to Business OpportunitiesAdvertising

St. Patrick’s Day Ads: Tips to Help you Get Lucky with CustomersAdvertising